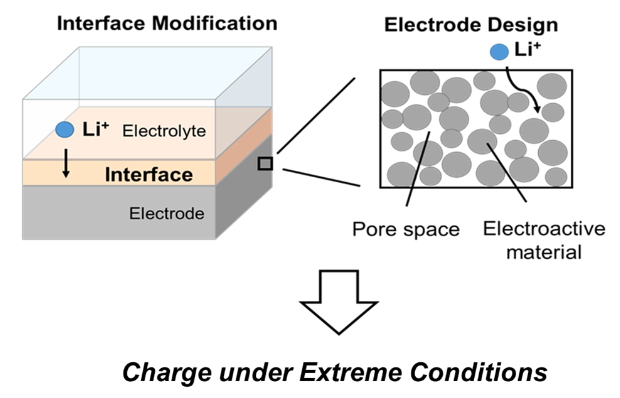 State-of-the-art Lithium-ion batteries (LIBs) degrade in delivered capacity and lifetime if charged repeatedly under extreme conditions such as high current or low temperature. This project is investigating new methods to meet the challenge of charge under extreme conditions using a combination of approaches. Modification of electrode materials and electrode design, as well as electrode/electrolyte interfaces are being used to improve battery behavior under fast charge and charge at low temperatures. Methodology used to accomplish the project goal includes construction and electrochemical testing of pouch cell batteries as well as material and interface characterization. 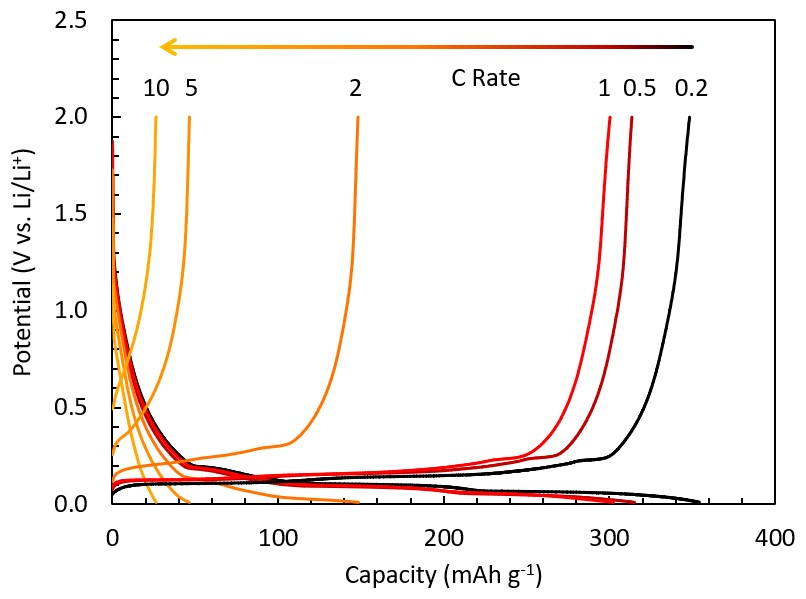 Graphite is the standard anode material in most existing lithium-ion batteries (LIBs), and its near-full capacity can typically be cycled under charge rates up to ~1C. At faster charge rates, its capacity diminishes significantly. Nanostructuring, coating strategies, or electrolyte engineering are typically suggested as a means to improve the rapid charge performance of graphite. However, the precise mechanism by which charging is limited when using graphite as the active anode material remains poorly understood - solid-state diffusion of lithium within the graphite interlayer galleries does not seem to be the limiting factor. In this work, we aim to elucidate the mechanism by which the charging rate is limited in standard L-ion battery chemistries by systematically investigating crystallite and particle size effects as well as electrode thickness and anode-cathode pairing effects. Our goal is to determine the maximum rate of charging uncoated, crystalline graphite can sustain over long-cycling and extreme temperature applications.